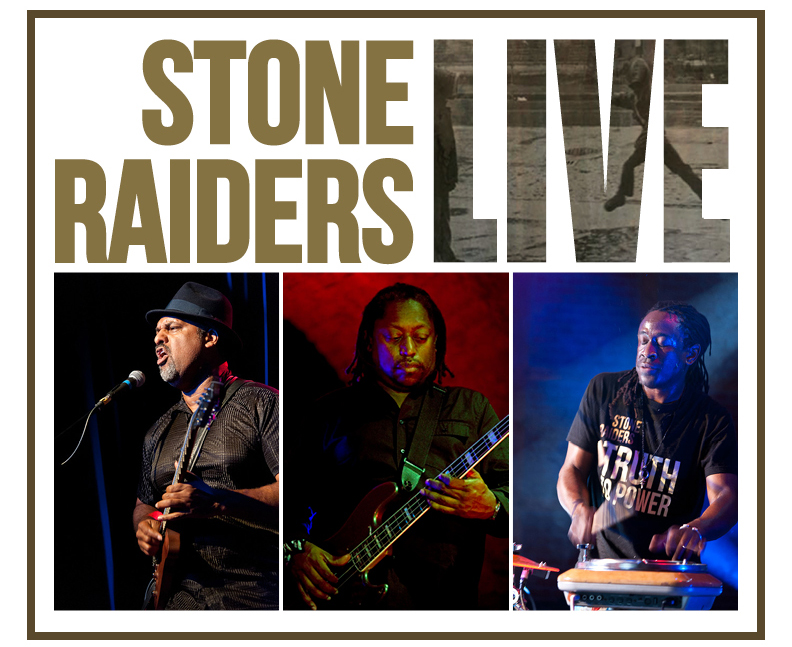 A rock trio with muscular grooves and provocative lyrics, Stone Raiders infuses sonic innovation and social commentary into rock and roll through the vortex of the blues.  Jean-Paul Bourelly, Darryl Jones and Will Calhoun bring forth a powerful and thought-provoking experience.

On Guitar: JEAN-PAUL BOURELLY
Jean-Paul Bourelly is an innovative and experimental guitarist composer who excels at blending and bending various musical styles into cohesive expression. His music is informed by the migrant community of Haiti and the southern culture of Chicago’s south side that he grew up in.

Raised by first-generation Haitians, Jean-Paul grew up amidst an unusual blend of Haitian meringue, folkloric, and hard-edged urban blues of Chicago’s South Side. Along with his own singular musical vision, inspired by Howlin Wolf, Jimi Hendrix and a splash of Carlos Santana, Bourelly began to formulate his unique musical synthesis.

During the ’80s, he worked with Roy Haynes, Elvin Jones, McCoy Tyner, Muhal Richard Abrams, Steve Coleman, Marc Ribot, Pharoah Sanders, Elliott Sharp, Archie Shepp, David Torn, and Olu Dara. He produced albums for Cassandra Wilson. In 1987, he released his first solo album, Jungle Cowboy, and through 1995 he led the BluWave Bandits. Near the end of the decade, he played on Amandla, one of Miles Davis’s last albums. Since the ’90’s Jean-Paul has been touring and record with his own various bands and producing projects under his creative music hub JPGotMangos.

On Bass: DARRYL JONES
Growing up in a musical family on the south side of Chicago and playing alongside diverse world-class artists has provided profound musical insight and inspiration which can only be heard in the music of Darryl Jones.

After several years gigging around the Chicago music scene, Darryl’s international recording and touring career took flight at age 21, with jazz icon Miles Davis. Gigs with Sting, Herbie Hancock, Peter Gabriel, Madonna, Eric Clapton, and others soon followed, and since ‘93 he’s been the bassist for the Rolling Stones. When his schedule permits, he performs with other artists, co-leads a couple of bands, serves the legacy of The Chief with the Miles Electric Band; and in 2017 he debuted The Darryl Jones Project.

Besides touring and recording, Darryl keeps busy writing music, including composing the score for an award-winning film. He continues his education, and was selected to participate in the Sundance Institute’s famed Music & Sound Design Lab at Skywalker Ranch in 2017. He also teaches classes and conducts clinics around the world, and in 2014 he founded Jones Musical Instrument Company to craft custom basses and guitars.

Will has recorded two solo projects: Housework and Drum Wave, which provide an alternate canvas for his acoustic drumset artistry as well as his push for electronic tonal expressions. Will, Doug Wimbish, and Vinx joined forces to form the groundbreaking Ambient World Music band Jungle Funk. His first jazz CD as a bandleader is entitled The Will Calhoun Quintet: Live at the Blue Note. Will has worked with rapper Mos Def, both as a producer and performer.